Executive committee for the National Women Suffrage Association​ 1870
This picture has all members of the executive committee of the National Woman Suffrage Association. Some of the people pictured were leaders of the association such as Elizabeth Stanton, Susan B. Anthony, Carrie Chapman Catt, Frances Willard, Matilda Joslyn Gage and Anna Howard Shaw. The organization was formed in 1869. This picture shows the women that had set up this organization that had helped to push different rights for women and helped to further equality between men and women.

Susan B. Anthony and Elizabeth Cady Stanton 1891
In this picture, Susan B. Anthony and Elizabeth Cady Stanton are shown working together. Susan B. Anthony was a very influential women for many different reasons. She was an abolitionist, educational reformer, labor activist, temperance worker,
suffragist, and woman's rights campaigner. Elizabeth Stanton dedicated her life to the women's rights movement, and is known to have held the famous Seneca Falls convention. Some famous things these two women did together are, working on a newspaper known as The Revolution, and starting up the NWSA the "National Women Suffrage Association". Without these two women the ability for women to vote could not have happened. They are very important to the history of women in the United States.

Annie Turner Wittenmyer 1874
This is a portrait of Annie Turner Wittenmyer. Annie Wittenmyer was the first president of the Woman's Christian Temperance Union. This Union was formed because of the believe that alcohol is detrimental to society and it's functions. They believed that alcohol would create large problems and cause many people to become corrupt. One of their goals was to abolish alcohol as a whole. This union has helped with many different problems involving equal rights for women.

Jane Addams 1889
This picture shows an important American Woman during this time named Jane Addams. During this time Jane Addams is famously known for co-opening the Hull House with Ellen Gates Starr. This home was made to help new European immigrants who needed help. This is an example of how influential women were during this time period. They helped with many different social problems.
Constitution of the National Woman Suffrage Association 1873
This is part of a petition that was sent by Susan B. Anthony and Elizabeth Stanton to Congress. The source shown is a list of all the people who were associated and part of the official organization that they had established. This document is important because this is how this association explains and shows who they are and what exactly they stand for. This source shows me how important it is to make a statement so that you are taken into consideration and looked at seriously for matters that you are fighting for. This source also shows how organized and strong this association truly was.

The title page of "The Revolution" 1868
This source is the title page for a newspaper called The Revolution. This newspaper was worked on by both the efforts of Susan B. Anthony and Elizabeth Stanton. This newspaper mainly talked about the women's rights movement and more often women's suffrage. This source shows the different ways women got involved with society during this time. These two women dedicated time to putting out information out so that it would be available for all people in society during this time. It was beneficial in spreading the word and pushing toward woman equality reforms. 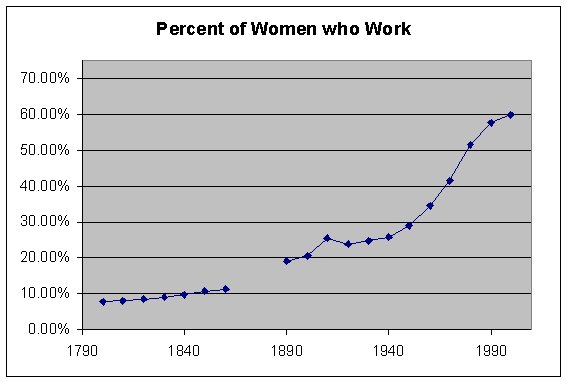 This graph is portraying the percentage of women who worked over the years. From the data that was found from this graph I can find that the amount of women who worked gradually began to increase. This could have been apparent for many different reasons. Families could be needed the extra money for finances. Also this is the era where women are starting to become more independent and they may want to fend for themselves.
Powered by